Why Should I Work For You?

In quite a few recent blog posts (here, here and here), the Hyrell team and I have taken a look inside the interview process. While researching and putting this information together, we discussed many good questions that can/should be asked during a typical job interview.  And, we also noted that the candidate should have their own interview questions in order to get a better sense of the company, the culture, and what kind of fit they will be in the organization.

Coincidentally, I had recent conversation with a well-qualified job-seeking friend & colleague. We talked about the job search, the interview process, and what was the right move for him.  We began to discuss why he would work for any of the companies that were interested in him, and it became clear to me that we shared the same view that many qualified applicants are beginning to embrace: “Why Should I Work For YOU?”

Sure, money and health benefits have always been a key driver in the decision to accept or reject a job - and for many people that is still the key decision point. However, as their careers become their lives, there are a growing number of people that want to ensure the proper work-life-balance and ultimately find fulfilment.

Take my friend for example: He is exceptionally (and somewhat uniquely) qualified for the career path he is on. But it’s simply not just about the money for him. As he told me, “All the money in the world isn’t worth it if I am not enjoying with what I am doing.” — maybe that alone is what makes him unique.  I pressed to see what would make a job worth it — better medical benefits? Free beer Fridays? Access to the corporate jet? (There was no jet.)  It was none of those things.

It came to down to whether the company was a good fit for his personality, his interests, and his work ethic/style.  He wanted to work at a place that challenged him every day. Where he wasn’t the smartest guy in the room, but still got to be a leader and teacher. He wanted to work at place that thrived on creativity, teamwork, and learning, but also gave him the freedom to work autonomously to get the job done. He wanted to work somewhere that collaborated well, but didn’t require 5 staff meetings and 6 conference calls a week to do it. He wanted to have the freedom to work from a coffee shop, the park, or even from home in his PJs. He’s not a typical idealist (or even a millennial for that matter), he’s just a guy who knows how to do his job really well and feels he should be able to have a choice in where he does this job and who he does it for.

I told him he was looking for a needle in a haystack - that companies like that rarely exist outside the pages of Inc. Magazine - but it stuck with me over the next few days following our conversation.

And so I asked around - friends, co-workers, mentors, interns - it didn’t matter, I was curious. Overwhelmingly, the responses (while not exactly as lofty as my friend) were very similar. People wanted to feel a connection to the place that they worked, the people they worked with and the job that they were asked to do.  So I took to this blog to remind hiring mangers: The next time you ask a candidate why you should hire them, keep in mind, they’re probably trying to figure out why they should work for YOU.

Enter your email address to receive new blog posts in your inbox.

Get Started with Hyrell Today 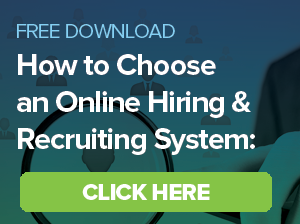